With FAIRTIQ's monthly capping, your expenses are kept within limits. 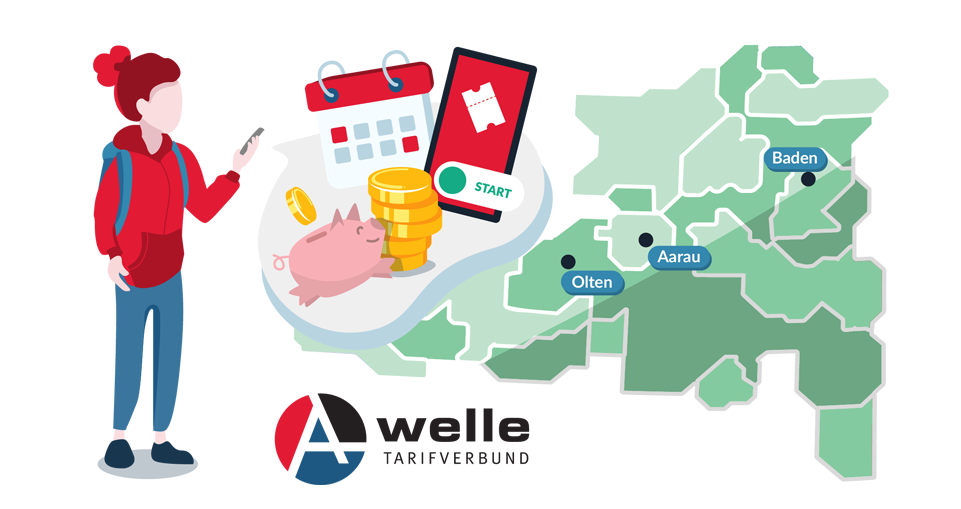 The monthly fare cap is the most flexible and advantageous way to pay for your travel across the A-Welle public transport network. If the price of your fares in one calendar month exceeds a certain amount (monthly cap), the difference is credited to your account on the FAIRTIQ app. This travel credit is then automatically used to pay for your fares during the subsequent month. The cap varies depending on the number of zones you travel in. However, you do not have to work out the zones beforehand. At the end of the month, the FAIRTIQ app will work out the monthly fare cap that best applies to you. This offer will only be available for a limited period: from 1 September 2021 to 28 February 2022.

What is FAIRTIQ?
FAIRTIQ is an app that makes it incredibly easy to use public transport. No more buying a ticket up front. No need to specify your destination. No time wasted trying to understand the fare zone map. With the FAIRTIQ app, all you have to do to get a valid ticket is swipe once before you board and again at the end of your journey. And there's more: no matter how often you change from one form of public transport to the other – train, bus, tram or boat – during your journey, the FAIRTIQ will automatically charge you the cheapest available fare.

How does the monthly fare cap work?
The monthly fare cap limits how much you pay for your public transport use over one calendar month. If you are a FAIRTIQ app user travelling in the A-Welle fare zone, every journey you make in the course of one month is charged to your FAIRTIQ account. So far, so normal. But with the monthly fare cap, if the total cost of your fares (incl. half-price fares for Half Fare Travelcard holders) is more than the fare cap set by A-Welle, the difference will be credited to your FAIRTIQ account. This travel credit is valid for one year, i.e. even after this special offer ends, and will automatically be used to pay for your subsequent public transport tickets in Switzerland purchased via the FAIRTIQ app.

What do I need to do to take part in this scheme?
Nothing. The monthly fare cap will automatically apply to all FAIRTIQ journeys in the A-Welle fare zones and for all available modes of public transport.

What is the maximum I will pay per month?
The upper limit depends on the number of zones you travel in. Say, most of your journeys are in Zones 510 and 511. As soon you reach the A-Welle monthly cap for 1–2 zones (CHF 100; see Table below), the price of all subsequent fares charged during the rest of the month will be credited to your FAIRTIQ account. The table below shows the monthly fare caps by number of zones.

As you can see from the Table, the monthly fare cap also applies if you travel in more than two zones. Say, your fares for journeys in Zone 530 add up to CHF 38, and the price of your fares for journeys in Zones 510 and 511 come to CHF 100, the monthly cap for 3 zones – CHF 138 – will apply. This means that if the total price of your fares is more than CHF 138, the price of all subsequent fares charged during the rest of the month will be credited to your FAIRTIQ account. Don't worry, though. The FAIRTIQ app will do all the fare cap calculations and work out the best cap for you. All you need to remember is that you have to spend a certain amount for journeys in one or several zones to reach the monthly fare cap.

I have a Half Fare Travelcard. Does this affect how the monthly fare cap is calculated?
The monthly fare cap is a fixed amount. This means that it is the same for everyone, i.e. regardless of whether you have a Half Fare Travelcard or not. The FAIRTIQ app adds up all the fares charged to your account in a given month, and on this basis works out if the total exceeds the fare cap that is applicable to you.

To the A-Welle network map

How do I know if I have reached the monthly fare cap?
You will receive a notification on your smartphone. Whatever you spend on fares in excess of the monthly cap is automatically credited to your account on the FAIRTIQ app. You can then use this credit to pay for your public transport tickets during the following month. To view your credits, go to the main menu in the FAIRTIQ app and click on the 'promotions' tab. The following month, your FAIRTIQ bill will clearly show how the credit has been deducted from the total amount you owe.

Do journeys paid for by my travel credit count towards the following month's fare cap?
Yes. If you exceed the monthly fare cap and your FAIRTIQ account is credited with the difference, you can then use this credit to pay for your public transport tickets during the following month. The journeys paid for by this credit count towards the fare cap for that month.

What about my connecting journeys to zones for which I have already reached the monthly fare cap?
As a general rule, your tickets remain unchanged and, as usual, you will be credited the difference for those zones where you have exceeded the monthly fare cap only at the end of the month. This means that if FAIRTIQ charges you the fare for the connecting leg of your journey on a given day, you keep this connecting ticket.

How can I let my friends and family know about this great offer?
Invite your family and friends using your code and you will all receive CHF 3 credit each!