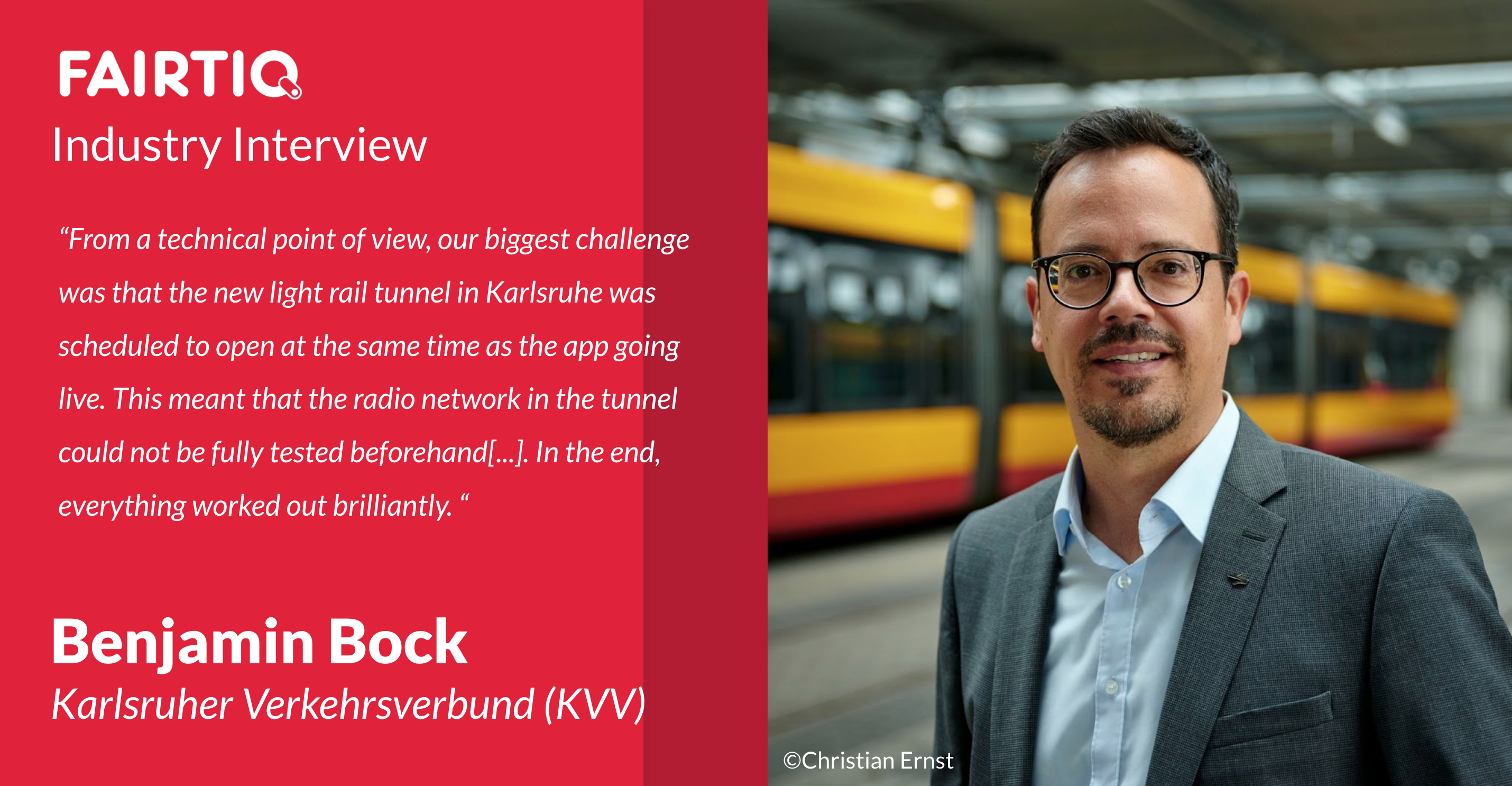 On 12 December 2021, the Karlsruher Verkehrsverbund (KVV) launched KVV.luftlinie, a distance-based fare that makes travelling by public transport in and around the German city easier than ever before..

"Our passengers really wanted us to bring in a proper distance-based fare. Thanks to our work with FAIRTIQ, we are now able to give them exactly what they asked for. The kvv.luftlinie fare is a cost-effective and easy-to-use alternative to paper tickets, especially for short-distance or multizone journeys within our network", explains Dr. Alexander Pischon, Managing Director of the Karlsruher Verkehrsverbund. 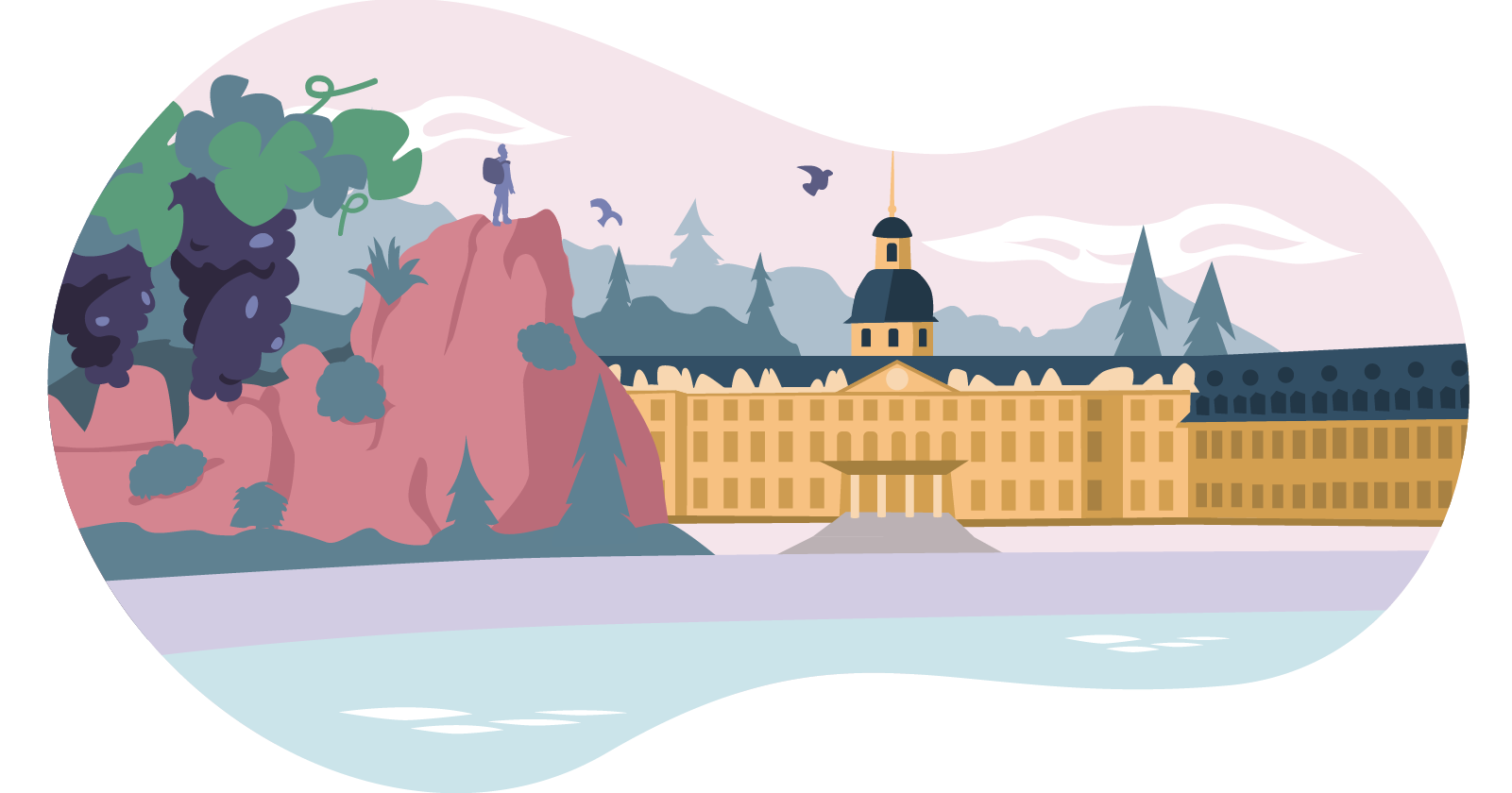 The KVV.luftlinie fare is available in the FAIRTIQ app, alongside all other mobility products offered by the German fare association’s own app, KVV.regiomove. In addition, railcard (‘Bahncard’) holders who use KVV.luftlinie benefit from a 25% discount on every journey. All they need to do is add their Bahncard details in the app and the 25% is automatically deducted from the fare price.

The KVV.luftlinie consists of a flat fare of 1.40 euros per journey, plus 22 cents per kilometre, or part thereof, travelled. Thanks to a daily fare cap, users pay a maximum of 10.80 euros, no matter how many journeys they clock up in one day. As a general rule, passengers never pay more than the price of a single Zone 1–7 ticket. For every journey, they only have to check in and out once, and can switch vehicles as often as they like.

Benjamin Bock, authorised representative and marketing director at KVV, spoke to FAIRTIQ about the project.

FAIRTIQ: FAIRTIQ went live in Karlsruhe in December 2021. Why did your transport association go for the FAIRTIQ solution?

KVV had initially contacted FAIRTIQ back in 2015 because we recognised the potential of your solution early on. When KVV decided to introduce a distance-based fare, we realised that the time had come to implement it in the FAIRTIQ app.

FAIRTIQ: What challenges did you face during the project?

The challenges we faced fall into two categories: fare-related and technical-related. On the fare side, our first priority was to identify the target group and resolve issues surrounding the price function. Basically, the thinking behind the distance-based fare was the creation of a new, transparent and easy-to-understand price function that was completely independent of our existing zone-based ticketing model. However, given that many of our fare zones are not only large but are also in periurban areas, it quickly became apparent that we needed to think carefully about how to set fare caps in such a way that was advantageous for all our public transport users. We therefore took our existing tickets and their zone-based pricing as our reference point. We are currently exploring the possibility of introducing a best price solution, i.e. the passenger is always charged the lowest available fare for their journey, whether distance- or zone-based. From a technical point of view, our biggest challenge was that the new light rail tunnel in Karlsruhe was scheduled to open at the same time as the app going live. This meant that the radio network in the tunnel could not be fully tested beforehand, unlike all the other existing stops and routes covered by the app. In the end, everything worked out brilliantly. Our passengers have been able to use the FAIRTIQ app since 12 December 2021 without any problems..

FAIRTIQ:  In addition to the distance-based fare, you also launched an entirely new model, the ‘homezone’. What is it and what outcomes do you hope it will generate?

The KVV.homezone is an electronic season ticket that is aimed first and foremost at new customers, but also at customers who have been put off from using public transport because of our zone-based ticketing model. The aim is to eliminate price jumps between zones, which can make the price of the journey feel unfair if, say, you live directly between two fare zones and therefore have to pay the more expensive of the two fares. Homezone is also fairer and more transparent because the fare is determined by the travel radius chosen by the user as well as the public transport services in that area. It is also extremely flexible: users can buy the product for a 28-day period, after which they can decide if they want to buy the KVV.homezone again and even adapt their travel radius. Given the shift to remote working models, we are looking into the possibility of developing a one-day travelcard option as well.

FAIRTIQ: What has the response been like so far?

Really good. We gained 8,000 users straightaway and, despite the coronavirus restrictions, our turnover in January was around 35,000 euros. The average ticket price is 2.12 euros shows that it is primarily used for shorter journeys, which is exactly what we expected.

FAIRTIQ: Is it possible to combine the homezone solution with the distance-based fare? How do users know which product is right for them?

The KVV.homezone is an electronic season ticket that can be easily supplemented by the KVV.luftlinie fare for journeys outside the user's KVV.homezone travel radius. We also have plans to develop a technical solution that will allow the two fare systems to communicate with one another and will automatically make the distance-based fare available to users when travelling outside their KVV.homezone travel radius. The main target group of the distance-based fare are occasional users, from pedestrians to business travellers and tourists.

FAIRTIQ: What else is planned for future cooperation with FAIRTIQ?

As I mentioned earlier, we are currently exploring the possibility of introducing a best price function and are working intensively with your developers. We also hope to launch a children's fare as soon as possible, and are looking into the possibility of giving users the option of purchasing tickets for additional travellers in the app.

Thank you very much, Mr Bock, for the great interview!

Contact us today and learn more about a partnership with FAIRTIQ: 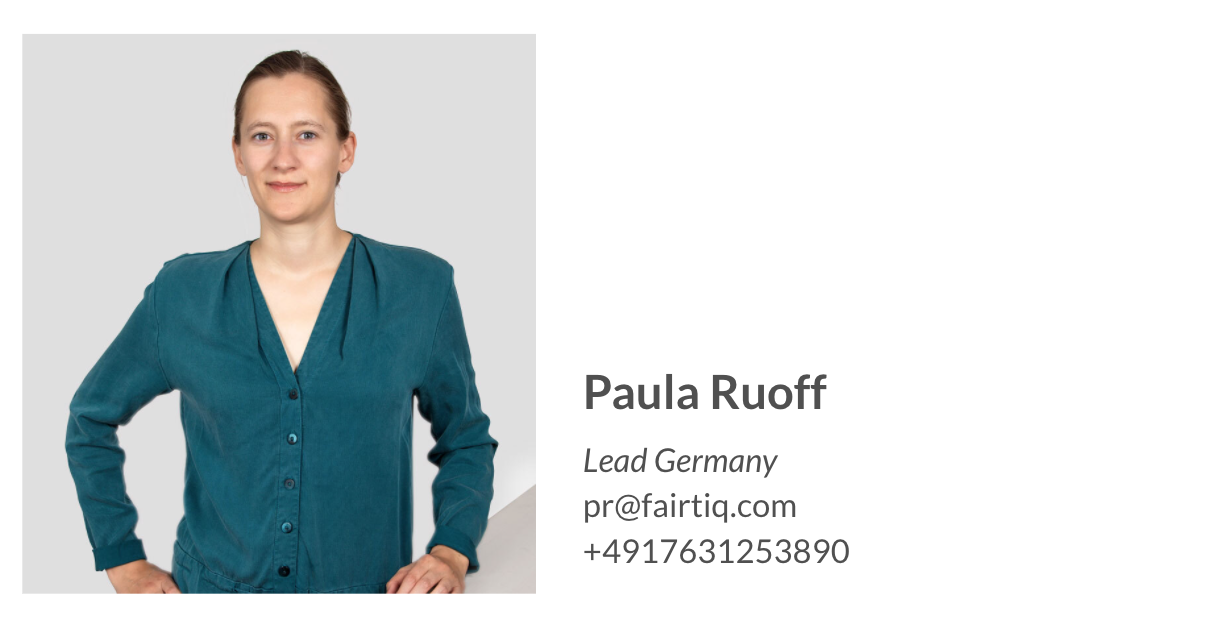 By Carolin Frühauf
Writer
Categories:
To read next

04.05.2022 | Carolin Frühauf
How the FAIRTIQ app keeps getting better
Rapid growth and continuous improvement go hand in hand at FAIRTIQ.