Sometimes you don't need to reinvent the wheel. This is especially true for public transport companies which have their own tried and tested timetabling app but want to offer digital ticketing too. FAIRTIQ has an easy, readymade solution for them.

Most transport companies and associations already have their own apps that offer timetabling and other real-time information. Take the app developed by the German regional transport association Verkehrsverbund Mittelthüringen (VMT), for example. The app's route planner feature lets users directly switch over to the FAIRTIQ app once they have selected their preferred connection. For VMT app users who have already installed the FAIRTIQ  app on their phone, all they have to do is swipe to check in. Travellers who have never used the FAIRTIQ app will be immediately redirected to the app download page. Those who already know what connection they are going to take can bypass the VMT route planner screen and immediately skip to the FAIRTIQ app. 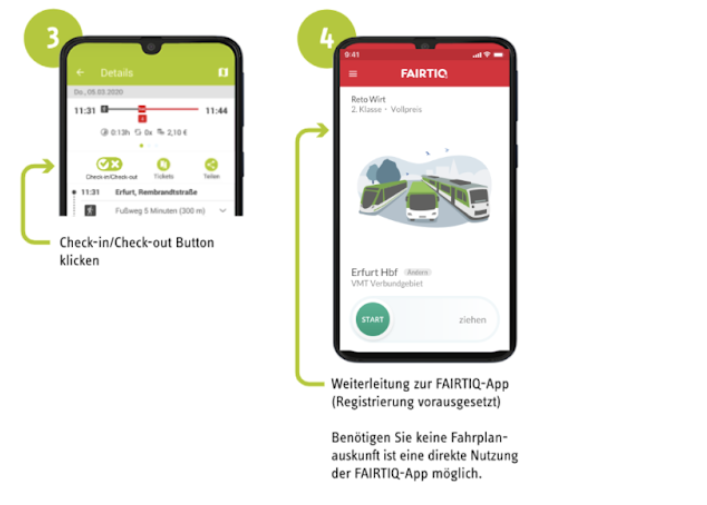 If the user already knows what connection they are going to take, they can directly skip to the FAIRTIQ app.

Mein Halle, the app developed by the Stadtwerke Halle, the German city's municipal utility company, features regional news reports, weather forecasts and an interactive city map with a host of practical public transport information, as well as a direct link to the FAIRTIQ app. This means that travellers in the city can use the local app to check the time of the next tram and then switch to the FAIRTIQ app to buy their ticket.  Rather than going to the not insignificant expense of adding new technology to its portal, the municipal utility company opted for the more cost-effective, simpler option of integrating a shortcut to FAIRTIQ's ticketing solution. 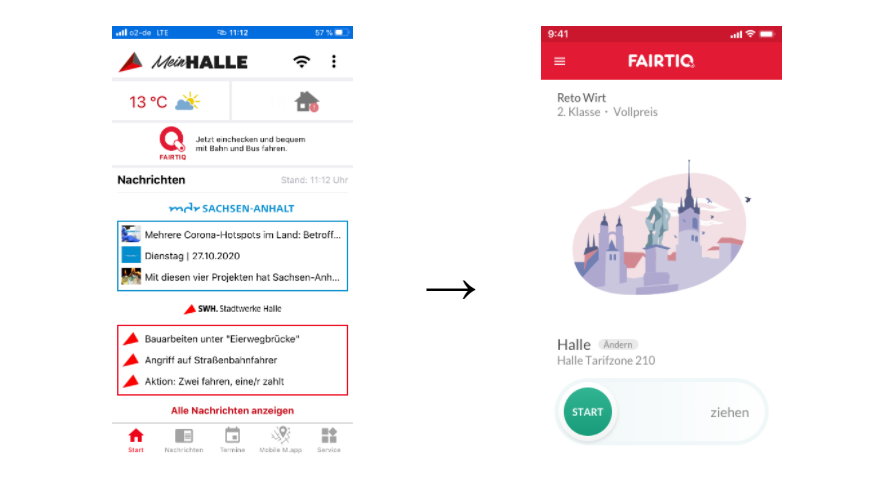 VVV, the public transport association in the Austrian region of Vorarlberg, has adopted a similar strategy by combining its timetable app cleVVVer mobil with FAIRTIQ technology. According to Christian Hillbrand, the managing director of VVV, the reason why the company opted for two applications rather than one is simple, "Given how quickly things change, time was of the essence. This is why we prefer to offer our customers access to the latest technology via two apps rather than being left playing catch up.”

Quick and easy to implement

One of the advantages of this solution is that passengers can still use the local public transport apps to consult timetables and access other real-time information without having to worry about finding a ticket machine nearby or the fiddly business of buying a ticket online. With one swipe, the passenger has the ticket they need.

The solution also has perks for public transport providers. FAIRTIQ's ticketing technology can be integrated in local apps quickly and easily. At the same time, the local app serves as an effective electronic billboard for FAIRTIQ and its user-friendly, check-in/check-out solution.

Quick and easy to register

The registration process is also quicker for first-time users who access the FAIRTIQ app via a deep link because parts of the form will be prefilled using data stored in and transferred from the local app. And the benefits for passengers do not stop there – anyone travelling in any of FAIRTIQ's 31 partner regions can access the handy check-in/check-out solution via a single app.

This system offers users the best of both worlds – it combines the local expertise of regional public transport companies who offer all-important timetabling and other real-time information, with FAIRTIQ's sleek, uncluttered user interface that allows them to buy the right ticket for their journey even if they are totally unfamiliar with the network's fare zones.