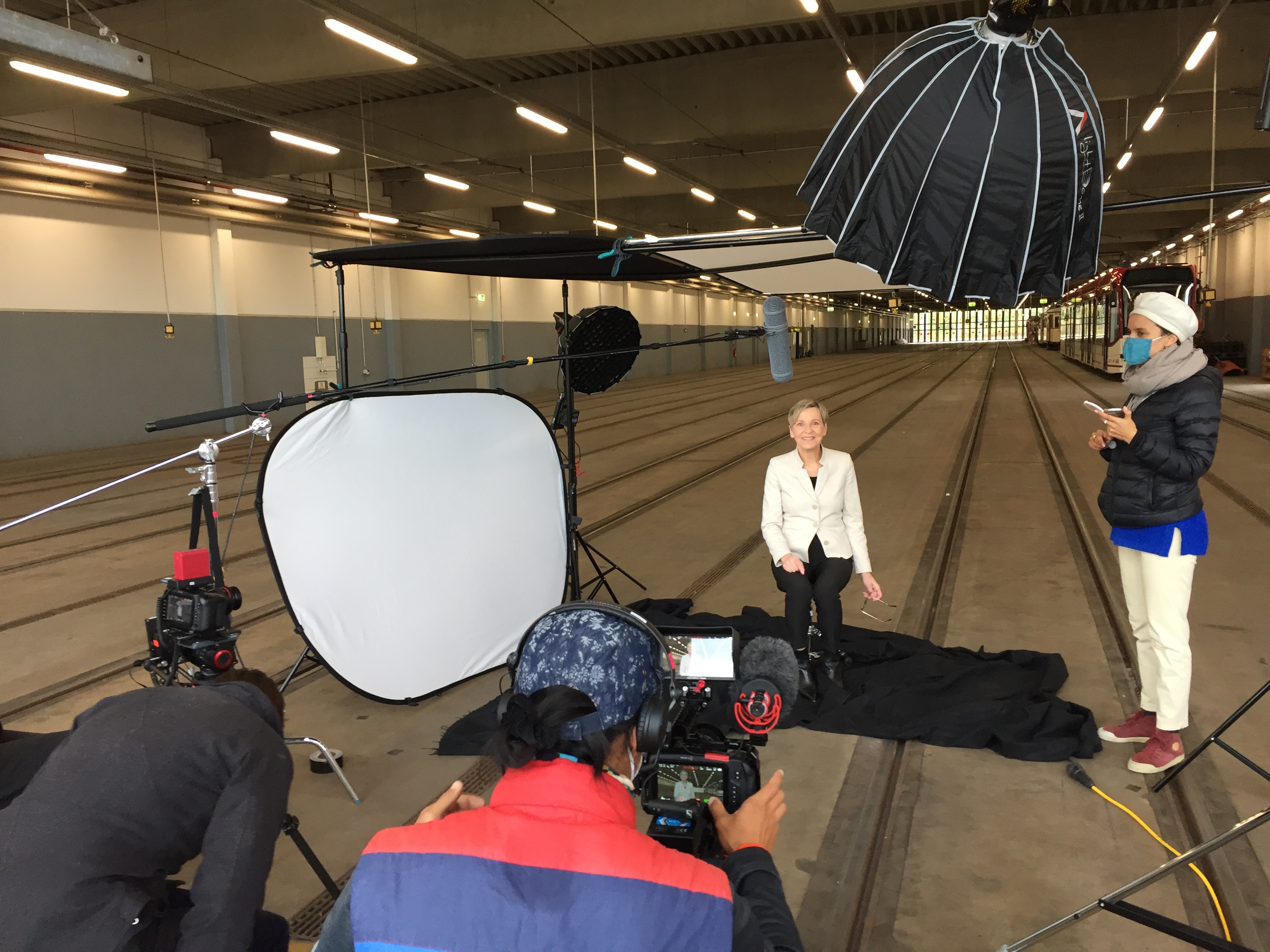 This blog post takes you behind the scenes of the video shoot with Myriam Berg, CEO of the Erfurter Verkehrsbetriebe AG.

FAIRTIQ, the EVAG team and Myriam Berg, who has been at the helm of the German public transport company for the last 11 years, have been working together since early 2020.

The FAIRTIQ app launched in Erfurt in March 2020 and very quickly proved a hit with the city’s public transport users.

“I didn’t have to think twice about taking part in the FAIRTIQ video shot. The FAIRTIQ app is simply brilliant and working with the FAIRTIQ team has always been positive and uncomplicated!”, Myriam Berg

Get an inside look at the two-day video shoot in this behind-the-scenes blog post. Find out how the seven-person team made the film in October 2020 despite the freezing autumn temperatures and coronavirus restrictions. 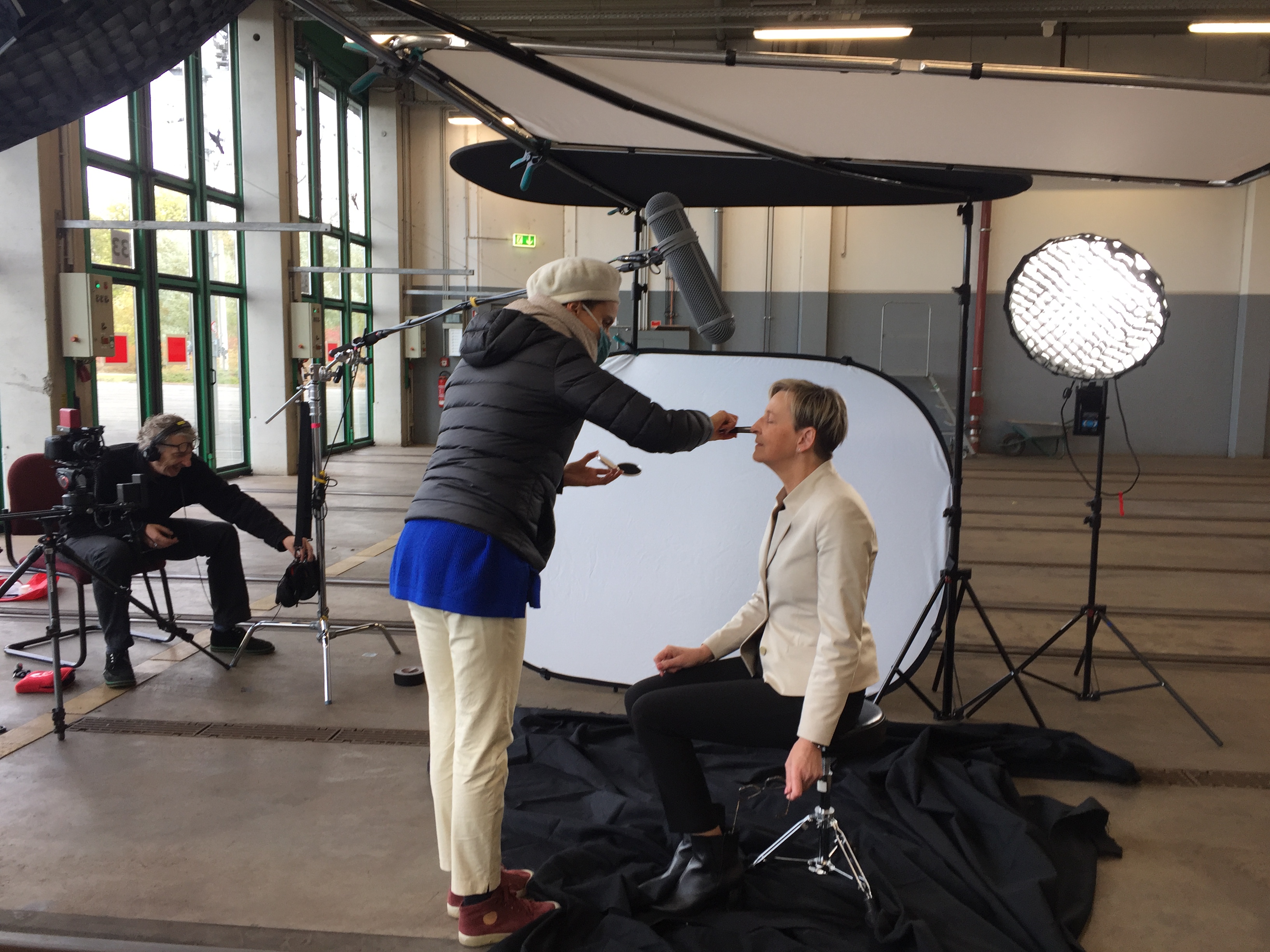 From EVAG, there was, of course, CEO Myriam Berg, who was joined by her two right-hand women, Tanja Klöppel and Anja Kümpfel. Supporting roles were played by EVAG tram drivers. The film crew were Ellen (production), Kiên (camera & editing), Maya (director & script editor) and Volker (sound). All four travelled to Erfurt from different parts of Germany to work on the two-day shoot. From FAIRTIQ, there was Paula Ruoff, who joined from Berlin, as well as Nicole Schawalder, who organised everything online from Switzerland. 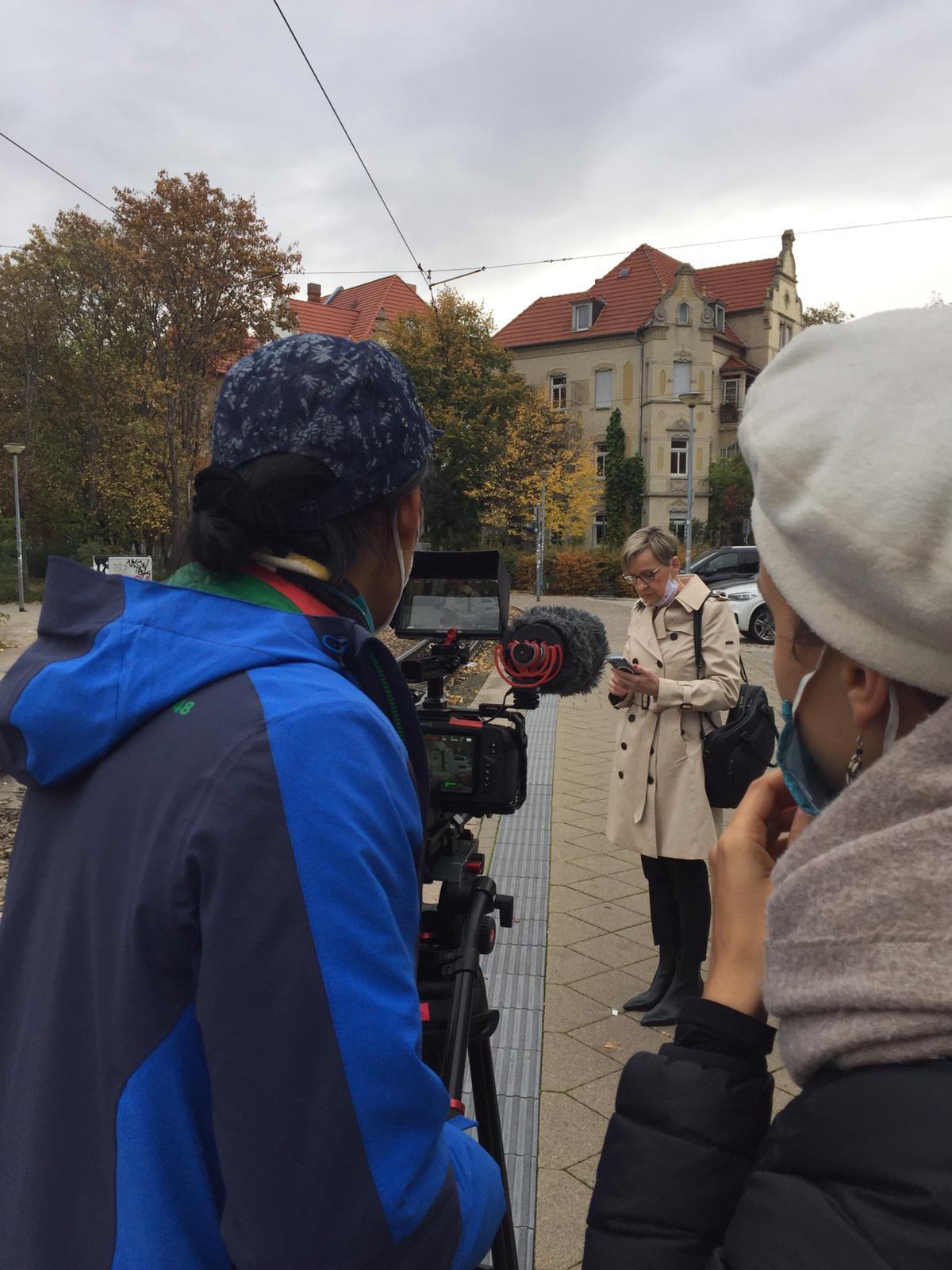 We wanted to show what a typical work day is like for the boss of a major public transport company. Myriam Berg very kindly obliged to let us follow her as she went about her business, including her morning jog!

The team created a storyboard setting out the running order of each film sequence and visualising the story that the film wanted to tell: 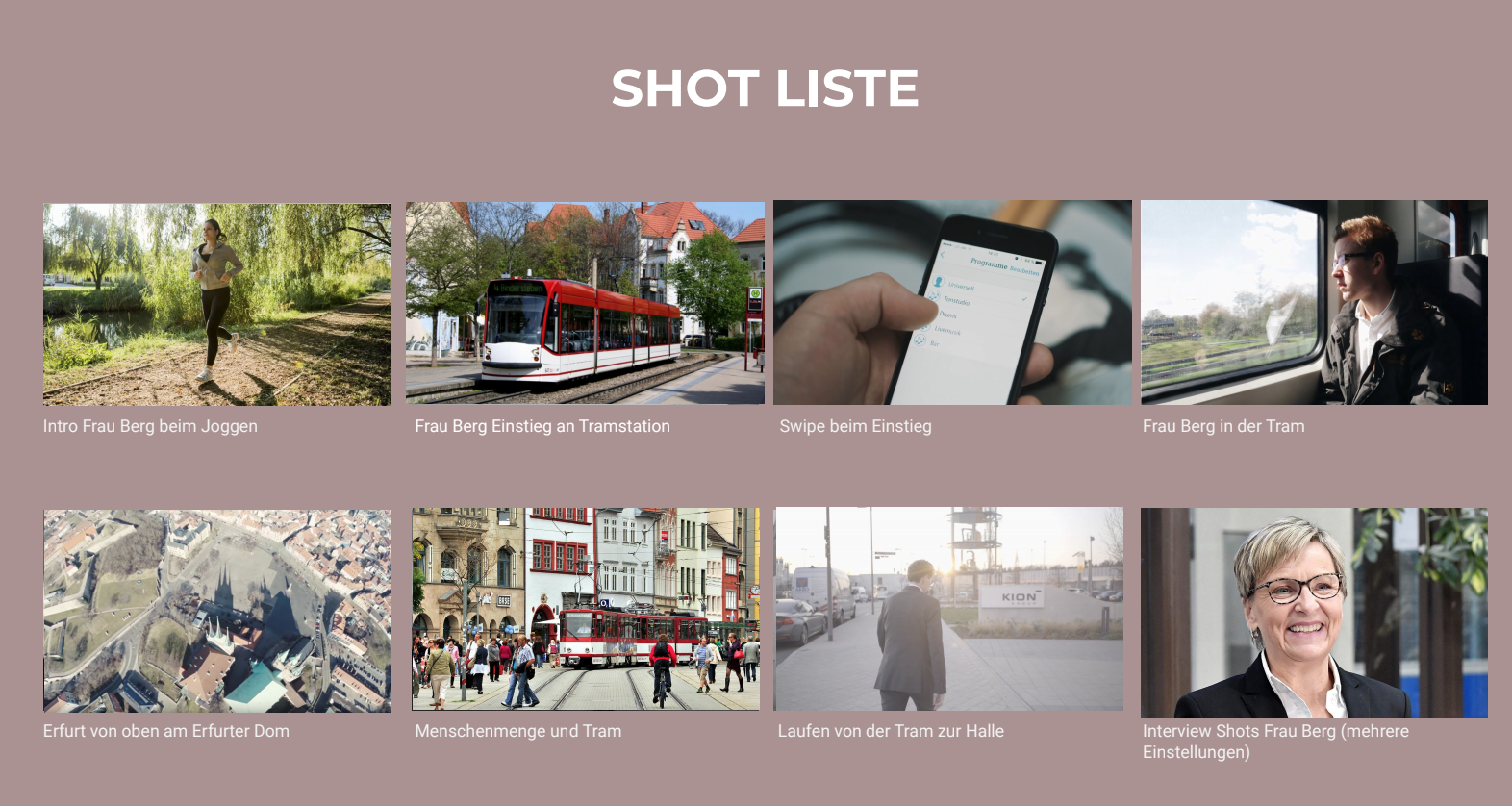 The opening shots of the film show Luisenpark in Erfurt in all its autumnal glory. 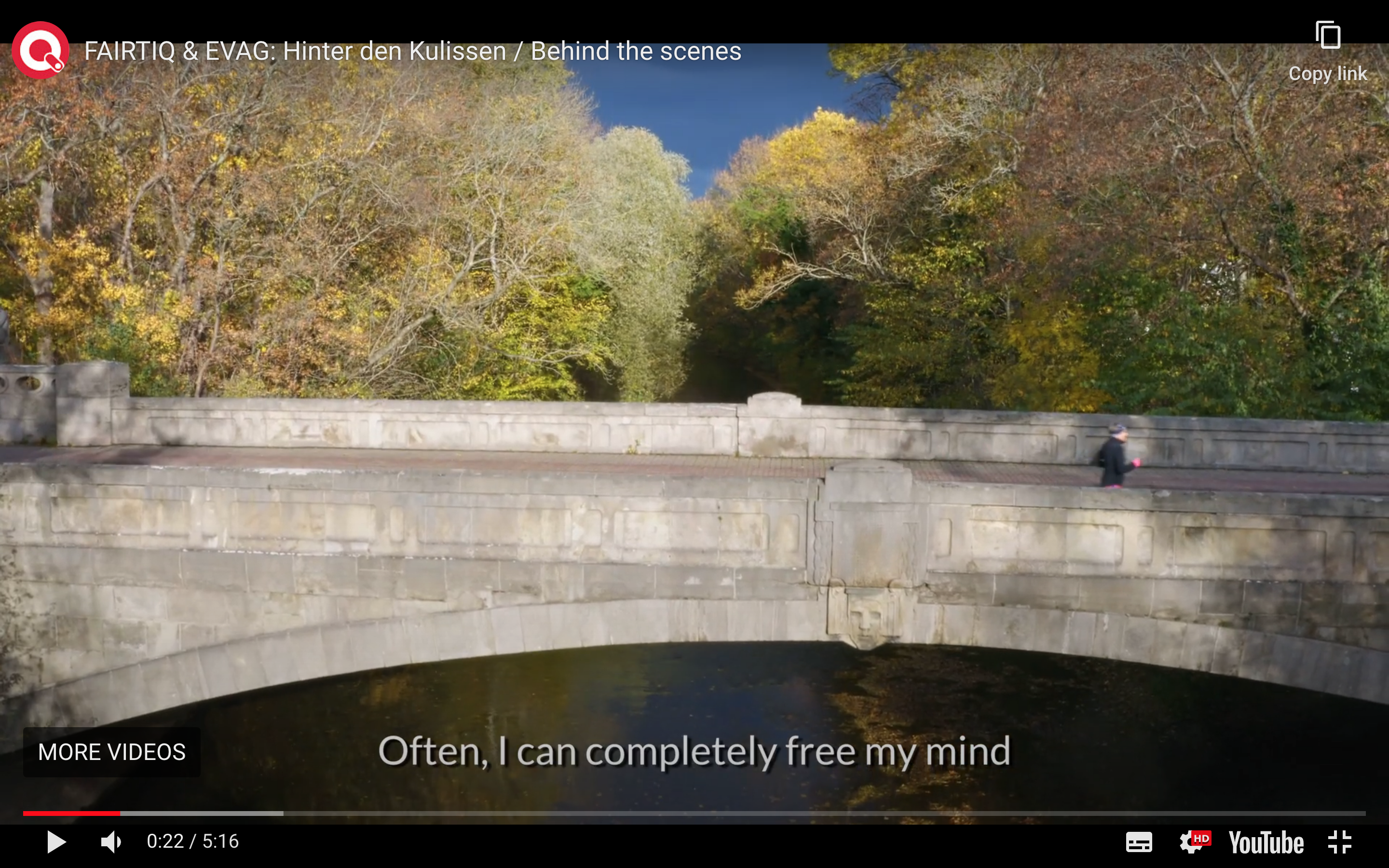 Filming then moved indoors, to the EVAG tram depot. To make sure that the framing was just right, the crew asked for some extra trams to be manoeuvred into shot. 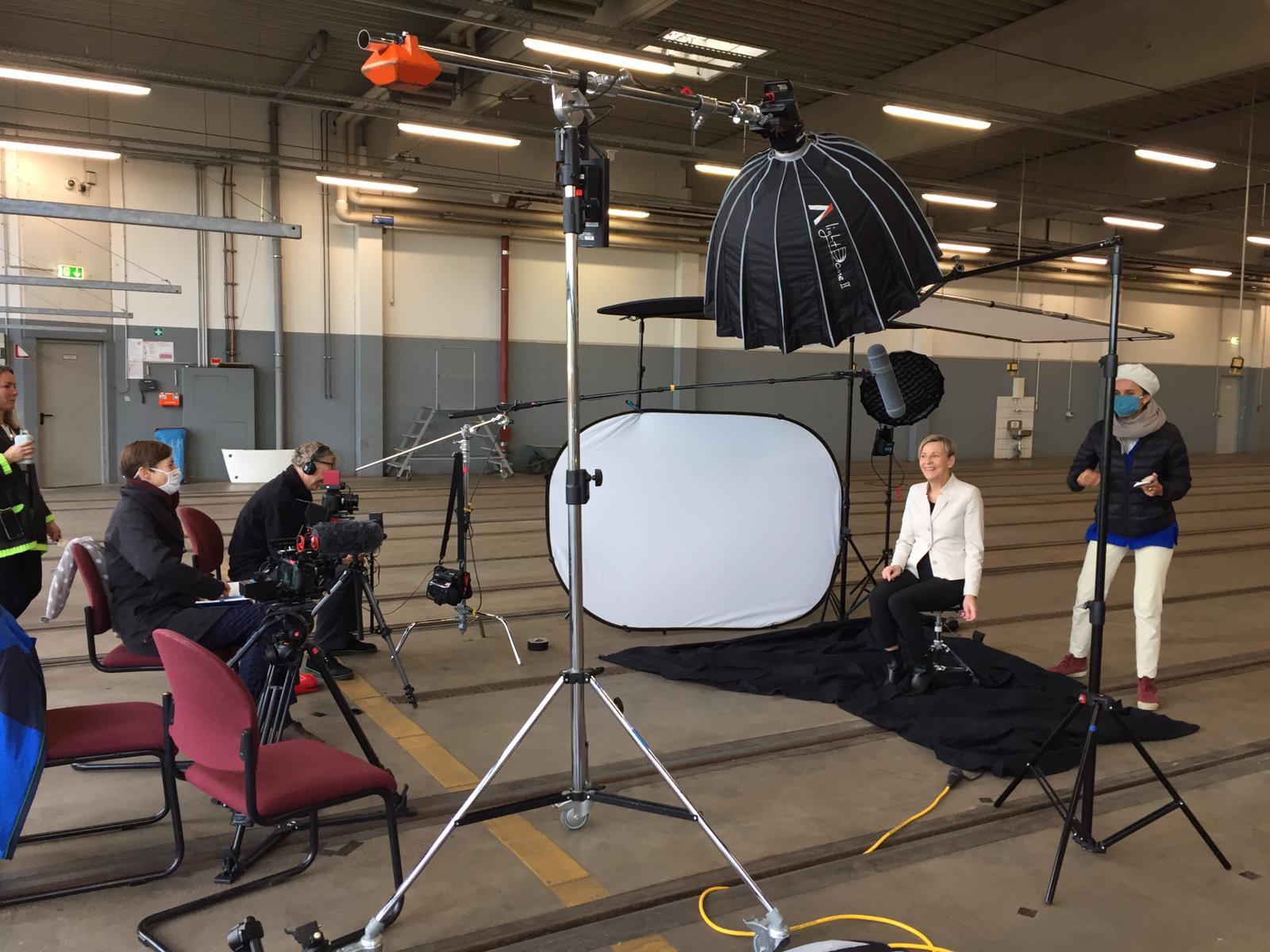 No detail was overlooked by the crew. The black blanket disguises the heater that kept the EVAG boss warm during the long shoot.Cameraman Kiên and soundman Volker had arrived the day before to shoot drone footage of the city. 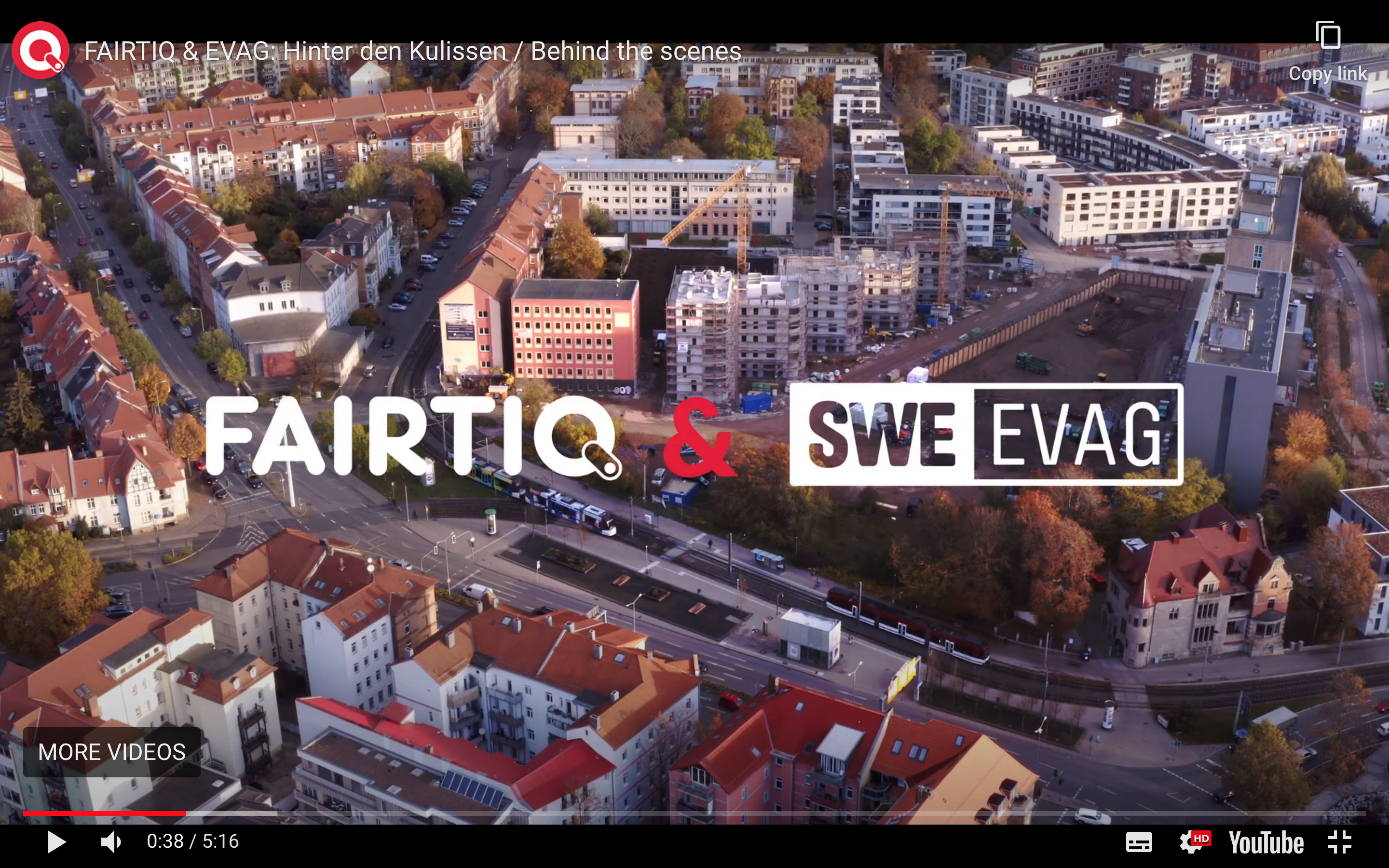 To wrap up the first day of shooting, Maya, Ellen, Ms Berg, Kiên and Volker met in Luisenpark. Quickly the rain clouds gave way to sunny skies. Before long the first scene was in the can.

Setting up the tram depot scenes proved challenging owing to the acoustics of the space and the noise of the passing trams, which constantly interrupted the filming.

Ms Berg remained relaxed throughout. After each interruption, she simply and spontaneously repeated what she had just said, like a true media pro.

For two hours the team withstood the chilly temperatures in the depot making sure the sound was perfect and all questions had been asked.

The group shot at the end of the video was taken at the Stadtwerke Erfurt headquarters, and shows everyone in the EVAG innovation team who has worked hand in hand with FAIRTIQ since the start of the joint project.

The meet-up with the EVAG team was the perfect end to a perfect video shoot. 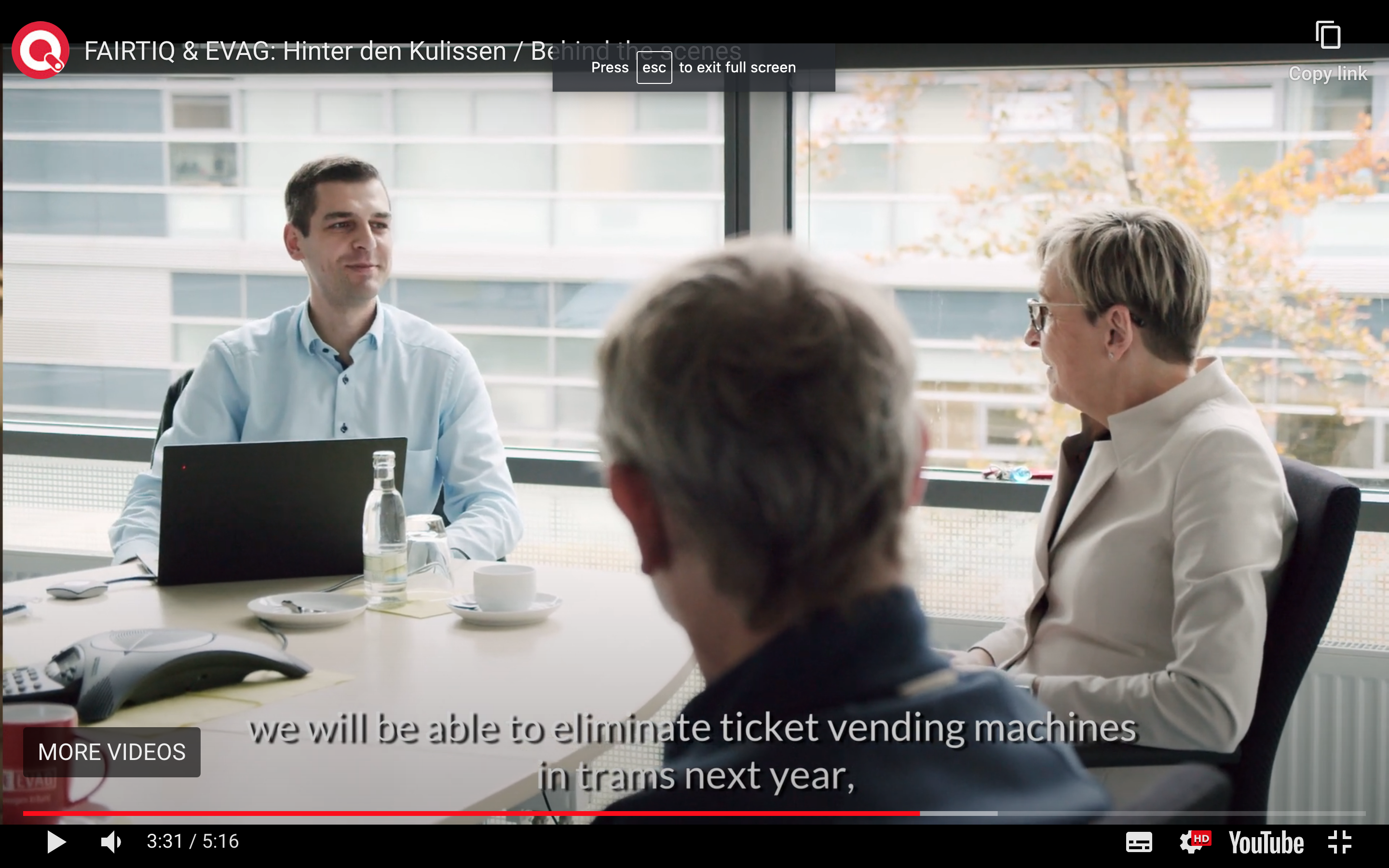 What did the film crew make of the EVAG–FAIRTIQ video shoot?

Ellen, producer:
“Despite the tight filming schedule, the whole shoot went without a hitch. We wanted the message of the video to be motivational, especially in the opening jogging scene. If the sun had not come out when it did, it would have been terrible. But, as if by magic, the skies parted just as we met Ms Berg in the park. So, we were able to start filming immediately.”

Paula Ruoff, FAIRTIQ:
“It was great to hear Ms Berg discuss, in her own words, what she appreciates about working with us. Also, it was fantastic that she agreed to give up so much of her valuable time to take part in the video. She mastered her new situation with flying colours.”

“The video shoot with the film crew and FAIRTIQ was super exciting and great fun, even though the weather was a bit of a challenge at times. Now I really know how hard the work on a film set can be. I will definitely not pursue a career in acting.”

🎥 For more details on the filmcrew: