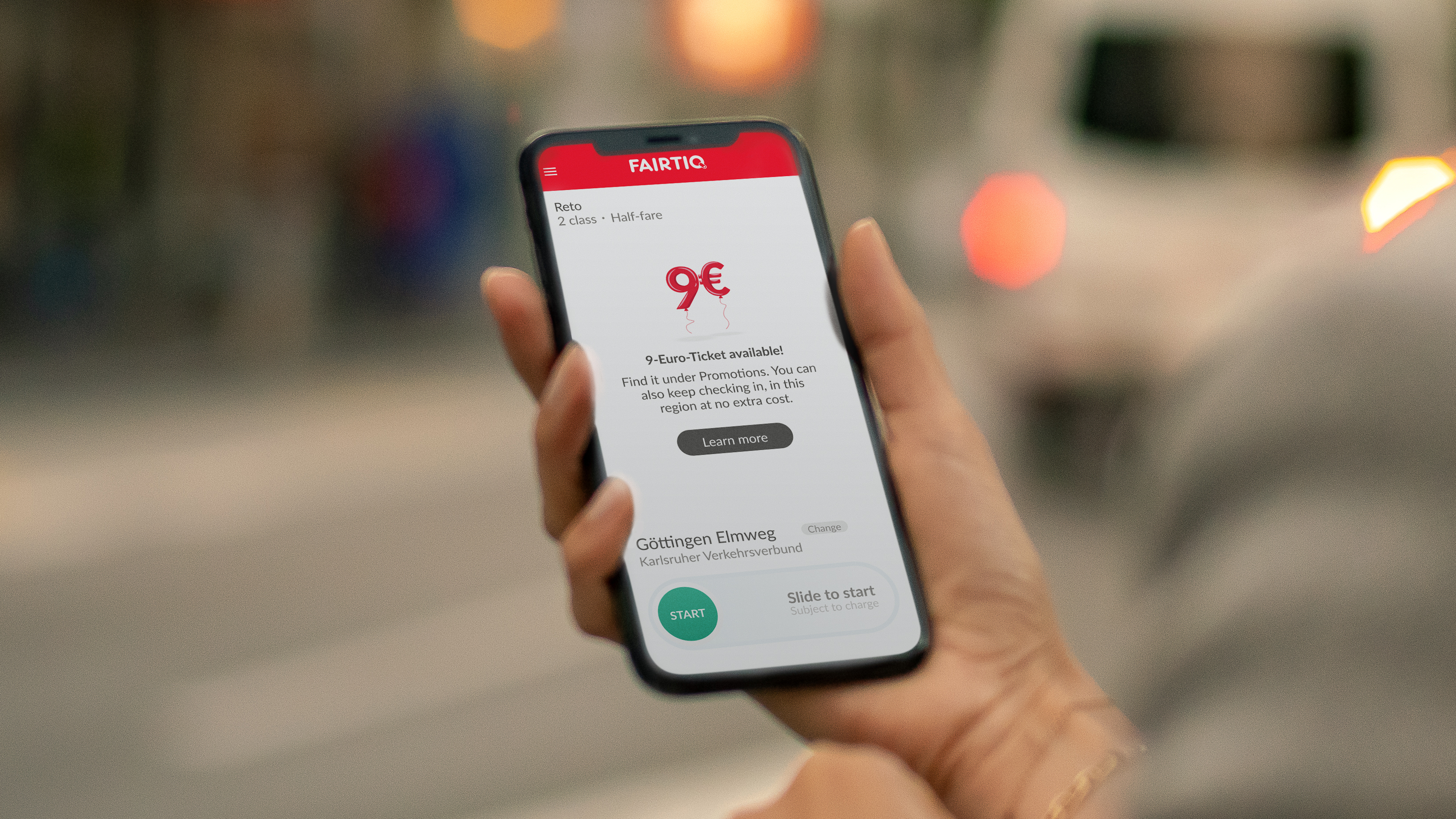 On 1 June 2022, Germany introduced the 9-euro ticket. The aim of the federal government initiative is to encourage the public to protect the environment by making the switch to public transport. This monthly cap, which will be available from June through to the end of August, replaces regional bus and train tickets. The measure is already an overwhelming success: almost 65% of people who have bought a 9-euro ticket but did not previously hold a season ticket are delighted with this generous offer.

Demand for the ticket is extremely high throughout Germany. Deutsche Bahn had already sold close to seven million 9-euro tickets before the 1 June launch, and a similar pattern is emerging across regional and urban public transport providers. The Berliner Verkehrsbetriebe (BVG), Germany's largest public transport company, has issued 520,000 tickets since the start of the campaign. In Cologne, Leipzig and Dresden, sales had topped 100,000 in a matter of days. Thanks to this offensive pricing strategy, bus and tram user numbers are nearly back to pre-pandemic levels. The FAIRTIQ app has played no small part in this recovery.

Integration of 9-euro ticket in the FAIRTIQ app

As FAIRTIQ CEO Gian-Mattia Schucan explains, "We worked flat out to find a swift technical solution to guarantee the user-friendly integration of the 9-euro ticket in the app.” In the few weeks between the Bundestag approving the discounted ticket as part of a larger relief package (May 2022) and the ticket launch at the beginning of June, FAIRTIQ managed to integrate the new fare product in its ticketing app. The start-up consulted participating partner regions and transport companies every step of the way. As a result, FAIRTIQ app users in Germany have had access to the 9-euro ticket from the get-go. Schucan explains FAIRTIQ’s thinking during the integration process, "Our goal was to stay true to our mission and make journeys with the 9-euro ticket as fair, transparent and simple as possible".

With the FAIRTIQ app, passengers are always sure to have the right ticket. All they need to do is slide the Start button on their smartphone before they board, then slide the Stop button, or use the automatic Smart Stop function if activated, when they reach their destination. FAIRTIQ technology does the rest: it works out the distance travelled and uses this information to calculate the fare for the journey. For users who make multiple journeys over one day, the capping function in the FAIRTIQ app makes sure that they pay no more than the price of a one-day travel pass. As Luise Rohland, who oversaw the technical implementation at FAIRTIQ, explains, "The 9-euro ticket is basically a new fare cap that is valid only from June to August."

What this means in practice is that public transport users in participating regions will automatically receive the discounted ticket as soon as their fares for the given month reach the 9-euro ceiling. Fares for all additional journeys they make during the rest of the month are not charged to their account. Once their fares total 9 euros, users automatically receive a ticket that is valid on all urban and regional public transport services across Germany, including those outside participating FAIRTIQ regions, during the rest of the given month (June, July and August). It should be noted that the discounted ticket, whether issued via the FAIRTIQ app or other points of sale, is valid only for 2nd class travel on participating regional bus and train services in Germany. However, separate tickets must be bought for Deutsche Bahn’s IC and ICE services.

Not all local and regional transport providers have chosen to make the 9-euro ticket available in the FAIRTIQ app. Rohland notes that FAIRTIQ took steps to notify its users in advance, "In the run-up to the official launch, we let our users know whether transport providers in their region had chosen to integrate the fare cap in the app or not."

Translation: "Cool. Just read that the 9-euro ticket is also available on @FAIRTIQ app. Swipe to start, swipe to stop. You only pay the cheapest fare up to 9 euros max." Source: Twitter

Although the FAIRTIQ app does not charge more than nine euros per month to the user’s account, the technology continues to record every additional journey that they make during the rest of the month. The fares for these journeys are credited to the user’s FAIRTIQ account and deducted directly from their subsequent bill for journeys that they make in participating partner regions. This approach not only makes life easier for the passenger but also generates valuable insights for FAIRTIQ’s partners into the mobility behaviour of users during the three-month special offer. As always, these data are anonymised.

FAIRTIQ can provide valuable information and insights into travel behaviour via the anonymised data that the app collects in the background. These data allow the participating transport providers to see how passengers use their services and better understand their customers’ needs. In a post on LinkedIn, BVG Managing Director Eva Kreienkamp writes, "For us it will be really important to analyse the travel behaviour of ‘newbies’ in the system. We specifically want to use the findings and information from these three months to identify where we need to expand our services and find out where people are actually willing to make the switch from car use to public transport, the more climate-friendly alternative."

An analysis of the travel routes will provide FAIRTIQ partners with pointers on what they need to do to win over more customers, and retain them. These findings could also be a valuable resource for better connecting with target customers.

Another benefit that the FAIRTIQ solution offers are the travel credits that are assigned to the accounts of app users once their fares exceed the 9-euro threshold. These let the transport companies see exactly how much fare revenue they have lost due to this discounted ticket. The app does not actually ‘sell’ the 9-euro ticket but calculates the amount users owe based on the journeys that they actually make. This means that FAIRTIQ partners receive detailed analyses that they can use for a variety of purposes, such as providing the federal government with a record of the fare revenue they have lost as a result of the time-limited discounted ticket. According to Till Hübner from the FAIRTIQ sales team, "Our standard sales reports serve as the basis for reimbursement applications. For our partners, this means that they can map to the nearest euro the revenue they have lost as a result of the 9-euro ticket."

There's no doubt about it: the schedule for implementing the 9-euro fare cap in the app was tight and proved to be a real challenge for FAIRTIQ. “We were incredibly agile during the implementation phase and ploughed all our energy into working with our partners to meet their needs when it came to integrating the 9-euro ticket in the app using our tried and tested technology," Hübner recalls. The fact that many transport regions in Germany saw a huge uptake of the discounted ticket within the first few days of its official launch is proof that FAIRTIQ satisfied the demands of our existing customers and even brought new ones on board.

It remains to be seen whether the 9-euro ticket is ultimately the right measure to attract more occasional travellers to use the bus and train. Luise Rohland is nonetheless delighted with developments, "The FAIRTIQ team welcomes the industry's decision to break new ground and leverage the increased flexibility that digitalisation and our smart technology offer." As a fare capping pioneer, FAIRTIQ is able to draw on proven market tests and capping procedures that have been successfully introduced elsewhere, such as A-Welle, the Aargau and Solothurn fare association in northern Switzerland. This was FAIRTIQ’s very first monthly fare cap project; app users have benefitted from the A-Welle fare cap since September 2021. The ‘travel more for less’ principle is also increasing passenger numbers on other modes of transport. One recent example is the fare cap that the Lake Geneva navigation company CGN has introduced on its boat services between Switzerland and France.

Fare capping is not the only flexible alternative to season tickets and travel passes that FAIRTIQ technology is capable of handling. In capping systems, there are always people who do not use public transport very often and therefore pay rather a lot per journey (which may lead them to reduce their use). At the same time, there are others who use public transport frequently and therefore pay very little per journey because all additional journeys they make after their fares equal the price of their season ticket are free. One alternative could be ‘degressive discounts’, i.e. a system where the price of each additional journey is cheaper the more one travels. This would be a fairer solution than price capping for assorted user groups as the per-journey price diverges much less from the given threshold.

"When it comes to discussions on extending the period of validity of the 9-euro ticket, we firmly believe that a solution which is built around FAIRTIQ technology would remain incredibly easy for passengers to use. It could also be designed more smartly within the pricing structure, which would offer real incentives for increased public transport use, particularly during off-peak periods." - Paula Ruoff, Lead Germany

Discover what FAIRTIQ can do for you.

Tap into our expertise and bring more occasional bus and train users on board.

Contact us today to find out what FAIRTIQ can do for you: