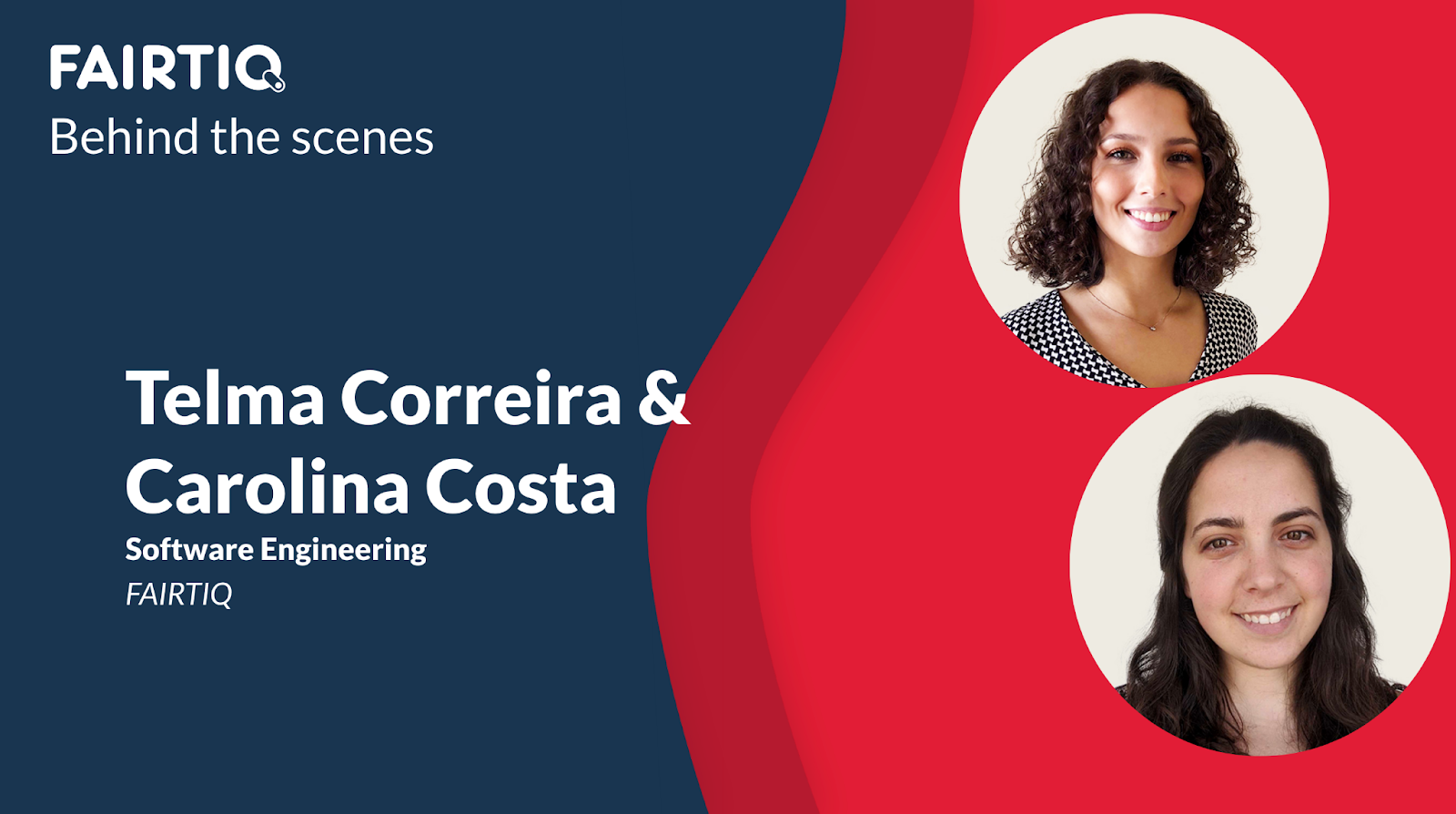 Carolina Costa and Telma Correia are software engineers at FAIRTIQ. We asked them about their views on women in tech.

Carolina Costa lives in Lisbon. Born and raised in Leira, she moved to Lisbon six years ago to study computer science, and has called Portugal’s largest city home ever since.

Telma Correia grew up in a small village near Castelo Branco, about 2 hours east of Lisbon near the Spanish border. She studied computer science and engineering in Lisbon and now works remotely for FAIRTIQ from her hometown, surrounded by the lush and peaceful landscapes of central Portugal.

Despite the recent buzz around the issue, a sizable gender gap remains, both in academia and industry. In Portugal, over 85% of IT students and professionals are still men, not far from the EU average of just over 80%.

Both overt and subtle discrimination against women remains commonplace in the workplace, and not just in tech. So it should come as no surprise that some women might feel reticent about working in such a male-dominated environment. Yet, many more have decided to venture into the tech world, and their number continues to rise.

We sat down (virtually) with Carolina and Telma  about their experience working in the tech industry and the journey that led them to their current roles at FAIRTIQ.

Hi Carolina and Telma! Tell us how you got into software engineering?

I was always curious about how the machines work, but I was the last one in my group of friends to have a computer. Finally, when I had one, I spent a lot of time discovering how it works and what I could do with it. I started getting interested in it and joined a technical programming course in high school. It was there that I discovered programming and, as a problem-solving enthusiast, I loved it. Later, my teachers convinced me to apply to study computer science and engineering in Lisbon.

Before university, I never imagined I would end up in tech. Actually, I had no idea what I wanted to do professionally. Because I couldn’t decide where to apply, I decided to try computer science, even though I was pretty sure I wasn’t going to like it. From my first class at university, my hunch that the majority of my colleagues would be men was proven right. Despite that, it didn't stop me from developing a passion for the tech world. It is a choice that I have never regretted.

How did you start working at FAIRTIQ?

I found out about FAIRTIQ through a recruiter on LinkedIn, who approached me out of the blue. I loved the product and the mission from the get-go.  Despite the fact that I was already working as a software engineer, I decided to give FAIRTIQ a try. My recruiting process was like any other at FAIRTIQ, the requirements for hiring an engineer do not depend on our gender. This was clear for me from the beginning since the recruiting process is well described on the FAIRTIQ website. In addition, as an employee, I already discussed the matter with my peers, confirming that my impression was correct. Being a woman was not an issue at all, and that’s how I believe it should be. That’s what we want, equality.

It was the recruitment process that mainly convinced me to accept a job with FAIRTIQ. Immediately, I understood that the company really cares about who they hire. I never felt that being a woman would negatively affect my chances. I was proven right, and this has remained the case during the whole time I have worked at FAIRTIQ.

FAIRTIQ encourages and supports its workforce. It wants us to bring our true selves to our work. At FAIRTIQ teams are diverse, whether by origin, gender or experience. This makes for a fun, respectful and welcoming work environment.

As an engineer, FAIRTIQ gives you the opportunity to grow your knowledge, no matter what path you choose to take. The range of areas we work on – from machine learning to high-scalable systems – enables us to build great foundations. If you enjoy being proactive and creative, FAIRTIQ's regular tech events give you the opportunity to tap into these skills.

Carolina and Telma sum up their FAIRTIQ experience:

Even though we still have a long way to go until we close the gender gap in the tech world, FAIRTIQ offers a welcoming environment, so much so that we almost forget that gender inequality is still a real problem in tech today.

We look forward to more women joining FAIRTIQ in tech and other roles, and helping to reinforce the company's commitment to workplace diversity and true inclusion.

By Sandra Tschumi
HR
Categories:
To read next